Bishop Robert Barron is, along with EWTN founder Mother Angelica, the modern successor to Archbishop Fulton Sheen in the title of America’s greatest Catholic media evangelist.

Through his Word on Fire ministry, he produced the landmark 10-part 2011 documentary miniseries “Catholicism,” and he’s about to come up with a major sequel, “Catholicism: The Pivotal Players.”

In between, he’s produced many articles and videos, and done innumerable lectures — and now he’s added all the duties of a Los Angeles auxiliary bishop, including confirming youngsters into the Faith.

But L.A. is about the last place the Chicago native expected to be. From an interview I did with Barron shortly after his transition to bishop in the Santa Barbara region in July 2015:

In the secular world, people usually lobby for promotions, or, at least, the subject is brought up with them at some point.

Not so, in the Catholic Church.

Not long ago, Robert Barron, Catholic media star, priest of the Archdiocese of Chicago and rector of its Mundelein Seminary, got a call.

“I was in my room on a lazy Sunday afternoon,” he said. “I had finished Mass, and I was back in my room, watching golf. This phone call comes from the apostolic nuncio, [Archbishop Carlo Maria] Viagano.

“I knew exactly what it meant — that’s the only reason he calls people. I knew it what it meant but I was really surprised by Los Angeles. That was nowhere even vaguely on my radar screen, because the whole bishop thing wasn’t on my radar.

“If someone becomes an auxiliary bishop, first, it’s almost always in your hometown. If someone had mentioned Chicago, that would make more immediate sense. So, I never dreamed of being a bishop in Los Angeles.”

So, why is he here? Barron said:

“Honestly,” he said when asked about the rationale for the move, “it’d be totally speculative. No one ever tells you anything. The nuncio didn’t, so it’s purely speculative; I have to be clear. 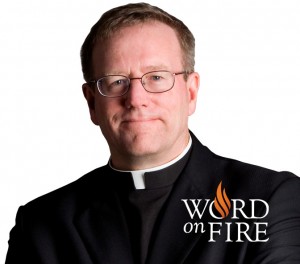 “Given my interest in media and evangelization and use of social media and all that, it would make a certain sense to send me to a cultural center, and certainly an entertainment and media center — I get that. Maybe people are thinking that. I don’t know.

“[Archbishop Gómez] seemed very happy I was there, very encouraging, very helpful. But he didn’t say, ‘Here’s why you’re here,’ or, ‘I want you to reach out to the media.’ That wasn’t on his agenda.”

In a new piece at Crux, posted on Aug. 12, Barron elaborates:

Gómez named Barron to head the Santa Barbara pastoral region, and after he arrived he told Barron he’d drive him out to Ventura to meet the priests who acted as deans of the region. In the car on the way back, Barron recalls, he asked Gómez, “What do you want me to do?”

Barron says Gómez pondered the question for a while, and then gave a response that, for those who know Gómez, is vintage in its directness and clarity:

“Be present to the people,” Barron says Gómez told him, “give them hope, and teach them doctrine.”

As for Hollywood, Barron said:

When news of the Barron appointment broke a year ago, many assumed that perhaps the “media bishop” was being sent out to evangelize Hollywood. Barron said no one has ever told him that’s part of the gig, but he’s taken it upon himself to try anyway.

“We’re trying to look at things like retreats and days of reflection for people in the industry … screenwriters, producers, actors, all of the above.” He said. “I think the quieter, more behind-the-scenes direct evangelization of those involved in that world is a better path.”

Barron also refutes speculation that he was made a bishop in L.A., not Chicago, because he had philosophical issues with Archbishop Blase Cupich of Chicago.

Visit the Family Theater Productions homepage and Facebook page to learn more about how FTP is reaching out to Hollywood and producing its own projects.