Today, Dec. 8, is the Solemnity of the Immaculate Conception of Mary, but she’s not the same thing to all people, or even all Christians.

WHAT DO YOU DO WITH A PROBLEM LIKE MARY?

Mary doesn’t speak a lot in the New Testament. But, the woman 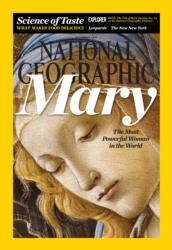 that poet William Wordsworth called “our tainted nature’s solitary boast” may be, as National Geographic Magazine called her in in Dec. 2015, “the most powerful woman in the world.”

Catholics have considered the Mother of God as part of their own families since the earliest days of Christianity. Indeed, there are those that speculate that many of the details in Luke’s Gospel came directly from her (a theory I support), so giving her a prominent place in salvation history, and in any movies about Christ, seems a natural.

But many non-Catholic Christians don’t give a great deal of thought to Mary beyond her role as mother to Jesus. For lots of Protestants, after the Crucifixion, Mary ceases to be a central figure of the Christian story.

MARY AT THE MOVIES

So, if you’re going to make a movie about Jesus that appeals to both Catholics and non-Catholic Christians — let alone non-Christians or even unbelievers — it can get tricky.

Speaking in late 2014, after the release of “The Bible” miniseries on History, and the abbreviated feature film created from the New Testament section of it, “Son of God,” Catholic producer Roma Downey talked about also playing Mary.

The whole series certainly affected our relationship [with Mary]. I think that it ultimately deepened our relationship. Playing that role was so moving. Of course, Mother Mary is one of the stories in the Bible that we speak of in the special. It’s very hard to imagine what she must have gone through knowing this was her baby boy, this was her son, and yet He was born for this life. Those moments at the foot of the cross, I know as an actress, it was heartbreaking. Jesus only said seven things from the cross and one of those things was asking John to take care of His mother. I think it says so much about who He was, who He is.

So, here’s a look at some of the Marian portrayals that may please Catholics the most (in chronological order):

British actress Olivia Hussey is lovely and believable in Franco Zeffirelli’s 1977 TV miniseries of Jesus’ (Robert Powell) life, still one of the best film renderings of the Gospels.

And here, Hussey is the backdrop to a rendering of “Ave Maria”:

As Deacon Steven Greydanus said in a rundown of Mary at the movies:

By far my favorite screen depiction of the infancy narratives, and my preferred Christmas viewing, remains the first 105 minutes of Franco Zeffirelli’s epic miniseries Jesus of Nazareth. Olivia Hussey is both luminous and ingenuous as Mary, and her performance is the key to the transcendent Annunciation — the only effective, moving Annunciation I’ve seen. Zeffirelli wisely never lets us see or hear the angel; with St. Anne, we see only moonlight pouring through a window on Mary, and hear a distant dog barking. Yet Hussey’s reactions persuasively take us from the fear of the angel’s first appearance to the reverent submission of the Fiat.

Later, Jesus of Nazareth offers an appealing twist on “Who are my mother and brothers?” by having Mary herself echo Jesus’ words to a bystander who says “You are His mother”: “Anyone who believes in our Father in Heaven is His brother, His sister, His mother.”

This 1999 TV movie stars Pernilla August (“Star Wars: Episode I — The Phantom Menace) stars as Mary (with Melinda Kinnaman as young Mary), David Threlfall as Joseph, and Christian Bale as Jesus. One of the producers is Catholic Eunice Kennedy Shriver.

Here’s Downey talking about playing Mary in her and husband Mark Burnett’s hit 2013 History Channel miniseries, and the 2014 film version of it, with Diogo Morgado as Christ.

Available on DVD (including Amazon and Ignatius Press), this 2014 film focuses directly on the life of Mary (Alissa Jung), from her childhood until the Resurrection.

After viewing this movie, Pope Benedict XVI said: “ Mary of Nazareth is the woman of a full and total ‘Here I am’ to the Divine Will. In her ‘yes’, even when faced with the loss of her Son, we find complete and profound beatitude.”

Most recent is the 2015 “Full of Grace: The Story of Mary the Mother of Jesus,” an independent film from Catholic writer/director Andrew Hyatt and producer T.J. Berden (good friends of Family Theater). It not only looks at the young Mary (Noelle Lana), but also her role (with Bahia Haifi as the older Mary) in the early Church in the decades after the Resurrection.

And, for Los Angeles locals, they may recognize filming locations around Malibu and Calabasas, California.

Visit the Family Theater Productions homepage and Facebook page to learn more about how FTP is reaching out to Hollywood and producing its own projects.